The most dangerous places in Berlin 2022

You are planning to spend a few days in Berlin? Then you should read the following article carefully.

Berlin is the most dangerous city in Germany after Frankfurt am Main. In Berlin, the police recorded around 504,142 criminal offenses in 2020. There was a little decrease in 2020 compared to 2019(approx. 514,000), particularly in the areas of property damage, politically motivated crimes, and crimes against the right of residence and asylum.

The damage incurred or recorded amounted to approximately 712,000,000Eur.

Here is a brief overview of which crimes have been detected and to what extent.

The majority of these crimes were fraud and theft.

Violence in the family or partnership: 16,327

Resistance to police forces and attacks on them: 7,505 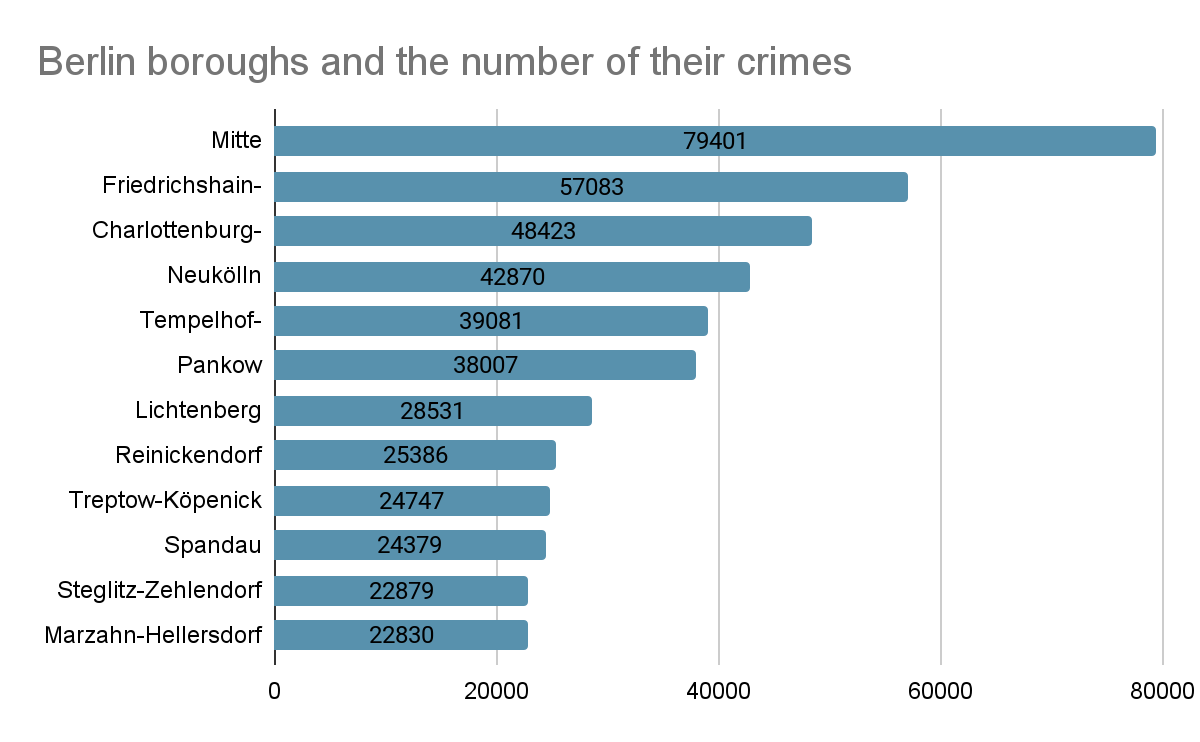 Most of the crimes occurred in Mitte. Comparatively speaking, Marzahn-Hellersdorf was the safest place to live.

What are the most important no-go areas in Berlin?

The 9 TOP NoGoAreas of Berlin

Tip: If you are a tourist in Berlin, I advise you to be extremely attentive the following places and areas urgently! Should you be adventurous in these areas, so go there in a group of at least 3-5 people! I will not talk about burglary here, as this rather does not concern tourists. But that doesn’t mean that you don´t take care of your valuables in the hotel room.

For its criminality next to the Görlitzer Park probably the most famous place in Berlin. Here you can find vending machines for drug syringes and other accessories needed for injecting heroin.

The Kottbusser Tor is in the heart of Kreuzberg. It is located directly between Alexanderplatz and Hermannplatz. On weekends, the area around Kottbusser Tor is a popular spot for nightlife. The area is best known for its numerous drug offenses, thefts, and assaults.

The square at and around the Kottbusser Tor shines with a whole 3300 crimes in 2020.

Where the Berlin Wall once divided the city into East and West, the Mauerpark is now one of the most popular parks and a must-see in Berlin.

Every Sunday, tourists, in particular, flock to the park area, where there is a flea market and a karaoke stage. Original Berliners, too, succumb to the allure of the colorful, creative park scene. After all, not only amateur singers, but also well-known artists, bands, and those aspiring to be one, perform here.

In addition, the park serves as a barbecue area and is a great place to soak up the Berlin sun.

The Warschauer Brücke connects directly to Friedrichshain’s popular amusement mile. The RAW district, with its numerous clubs, the Simon-Dach-Kiez, with its numerous bars and restaurants, and Boxhagener Platz are all nearby. During the tourist season, Warschauer Brücke is very popular. Drug offenses and assaults, in particular, are at the top of the list of criminal offenses in this jurisdiction. The area between Schlesisches Tor and the RAW area is particularly hard hit.

Hermannstraße begins further south at the Hermannstraße S-Bahn station and ends at Hermannplatz, a traffic junction in Kreuzkölln as well as an important subway intersection. The Reuterkiez neighborhood is not far away. Parts of Hermannstraße and Hermannplatz are regarded as high-crime areas. There, you should pay close attention to your belongings. Shoplifting, theft, and pickpocketing are commonplace here.

Many Berliners are familiar with Görlitzer Park. During the summer, both locals and tourists flock to the park. Drug dealers frequently stand near the entrances and openly sell their wares. As a result, it is not surprising that drug offenses are the most common criminal offense in this area.

It is world famous for its huge area for the practice of various recreational activities. As part of the old Tempelhof Airport where once the American “Rosinenbomber” landed to supply the city for the 1948/49 airlift.

Since there are many very quiet corners here, and good opportunities for escape, robberies are often committed here.

Rigaer Straße in Berlin-Nordkiez Friedrichshain’s district was long considered a stronghold of Berlin’s left-wing autonomous scene. In the past, the high number of property damages was particularly noticeable. The well-known left-wing house project “Liebig 34” in Liebigstraße was finally cleared with the help of several thousand police officers in the fall of last year. Since then, the house has been vacant and is being renovated.

Left-wing extremists often set cars on fire in this area.

One of the most popular tourist destinations is Alexanderplatz. Furthermore, because the Alex is located in the heart of Berlin, it serves as a public transportation hub. Three major subway lines intersect here. Theft, drugs, and assaults are the most common types of crime in this area. The police built a special police station on the site to prevent crime.

There are countless fantastic sights here. There is one architectural masterpiece after another. The most famous are: The bronze statue of Frederick the Great, the Humboldt University, the historic library, the Russian Embassy, the Hotel Adlon, the State Opera, the Memorial to the Victims of War and Tyranny, the Schlossbrücke, the Berlin Cathedral, the Berlin Palace and at the end of the street the Pariser Platz with the Brandenburg Gate.

As a cyclist I have been on the road here for many years and had to watch how the criminal subjects multiplied from year to year. Of course, they have specialized and professionalized in pickpocketing and cheating tourists.

You should know that there are training camps for pickpockets and scammers in Romania, which are actively run there.

The trained pickpockets and scammers are then easily brought to Germany (there are no borders within Europe) to do their “work”.

Now you know which places to avoid in Berlin or where to be extremely attentive!

Of course you have to watch out everywhere in the city and there are dozens more hotspots of crime in Berlin.

Find out about the 7 most common scams on tourists in Berlin.